We celebrated Smarty Pant's 7th Birthday with a Soccer Party. It wasn't what I had originally planned, but it all worked out and kids & adults had a great time. So here's what happened... four days before the party, I was notified that the Indoor Soccer Venue that I had booked two months prior was unavailable due to issues with the landlord. I'm a planner, not because I'm super organized, but because I don't do well in last minute, stressful situations... Sooooo.... Yeah, all that planning was for naught... I was more than a little stressed out!

Thankfully, with a friend's help, we were able to secure a park with a field, pavilion and picnic tables (btw, easier said than done). The weather even cooperated-- It was warm but nowhere near the 100+ degree temps of the previous weekend. Hallelujah!

pros: The kids got to play soccer, tug-a-war and dodgeball on the field AND play on the park equipment. The parents got to enjoy the beautiful weather and relax in the shade.

cons: I didn't get to hang-up the decorations that I made for the party. Bummer. 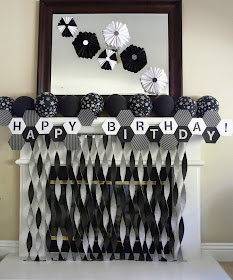 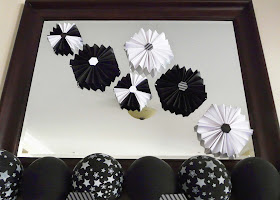 the tutorial for the hexagon paper medallions can be found here

Anyhow, since it doesn't scream kid's birthday party, I think I might keep the decorations up for a while. :) 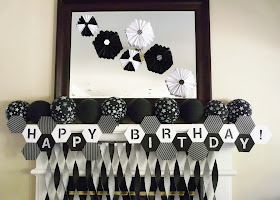 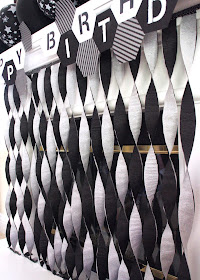 For the invitations, I created this simple design in Photoshop-- 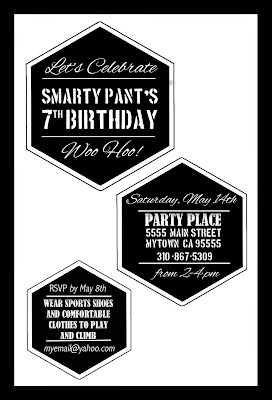 Unfortunately I didn't get great photos of the rest of the party decorations. In the pre-party rush, I forgot my camera at home and had to rely on my phone. I kept it simple-- the tables were covered with black table cloth; we used matching black/white plates, napkins and utensils; a small soccer goal decorated the food table (which actually helped keep things from flying away).

Here's a few shots of the actual party. We ended the party with a Kids vs. Dads dodgeball game. It was fierce competition and the kids eeked out a win. It was hilarious to watch. 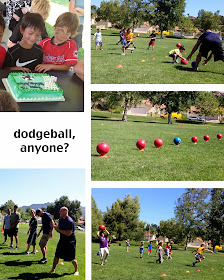 I'm so glad everything worked out... Just seeing the birthday boy's smile made all the stress and last minute scrambling worth it! I can't believe I have a seven year old. sigh. It's just going by too quickly.

disclaimer: for the nega-ninnies... Yeah, I know it's not really "modern", but since I didn't decorate with a bunch of soccer balls, I decided to call it modern soccer. Mmmkay?  :)
Bliss Bloom Blog at 10:44 AM
‹
›
Home
View web version